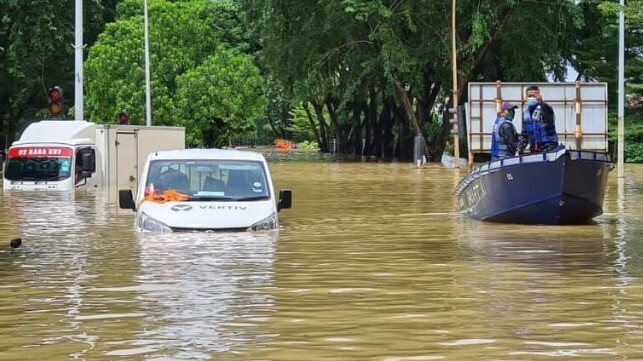 Heavy rainfall in peninsular Malaysia has disrupted traffic at Port Klang and the surrounding area, the port authority said in a statement Saturday.

Located on the Strait of Malacca, adjacent to Singapore, Port Klang is the 12th busiest container port in the world, handling more than 13 million TEU per year. Its primary source of volume is in the transshipment of goods transiting the busy strait.

According to the authority, heavy rainfall and flash floods have severely affected operations at Port Klang’s Northport, Westport, and Southport terminals. The flooding has also hit warehouses, empty container depots, and access roads. In addition, many ports and logistics workers aren’t able to get to work because roadways are cut off.

The authority warned that cargo movement is expected to be “severely affected,” and its operations will be delayed at least several days. Vessel berthing will also be delayed due to the foul weather, which has already created a backlog of vessels at the outer anchorage – and more ships are on the way.

In the meantime, Port Klang Authority is working with local partners to make the best of the limited available resources. It is prioritizing the movement of perishables and essential items, like medical supplies and refrigerated goods.

“We appeal to the public to exercise patience while we navigate through this difficult period and we are confident that together we will overcome these challenges,” the authority said in a statement. “In these challenging times which call for a united show of resilience and compassion, we urge the port and logistics community to extend the required aid to local communities who are affected by the floods.”

Floodwaters in the Klang Valley began to recede on Sunday, according to fire and rescue officials in the province of Selangor. However, in the state capital of Shah Alam, local media reported that several major thoroughfares were still blocked by flooding. Road washouts and sinkholes have also been reported.

A mass mobilization effort evacuated about 21,000 residents of the Klang Valley over the weekend, and the relief effort has switched to cleanup and emergency food distribution. One individual was found dead of drowning on Sunday – the first fatality associated with the storm.